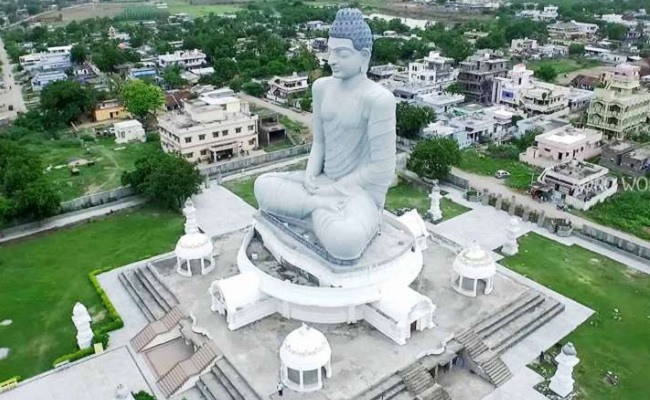 More than one-and-half month after Andhra Pradesh High Court delivered its verdict on the state capital, the work on some pending projects in Amaravati resumed on Saturday.

Officials resumed the activity to complete the works on MLA and MLC quarters in Rayapudi.

The work is likely to be launched on a full scale from Monday as more workers will be joining the duties.

Amaravati farmers, who have been opposing the state government’s three-capital plan, welcomed the workers by presenting them flowers. The farmers said the intervention of the high court has done justice to them.

They demanded that the government also take up works relating to provision of basic amenities and hand them over developed plots which were promised to them in lieu of the lands taken from them.

The court also asked the government to hand over developed plots with all basic amenities to farmers within three months. The government was also asked not to alienate lands in Amaravati for any work other than development of state capital.

A bench of three judges headed by Chief Justice Prashant Kumar Mishra pronounced the judgment on 75 petitions filed by Amaravati farmers and others challenging the government’s move for trifurcation of state capital.

Though the Jagan Mohan Reddy-led government made it clear that it remains committed to three-capital policy, it decided to complete some works which could be required to continue Amaravati as a legislative capital.

The YSRCP government on November 22, 2021 repealed two laws enacted last year to create three state capitals but announced that it will come out with a new comprehensive legislation.

The government, however, had made it clear that it had not gone back on the decision to have administrative, legislative and judicial capitals at Visakhapatnam, Amaravati and Kurnool respectively.

The development had some as the high court was to resume hearing on a batch of petitions challenging the two legislations made in 2020.

After coming to power in 2019, YSRCP had reversed the decision of the previous TDP government to develop Amaravati as the only state capital. This had triggered massive protest from farmers of Amaravati, who had given 33,000 acres of land for the capital and were hoping to reap its economic benefits.

The farmers, women and others have been protesting against the trifurcation for more than 800 days.