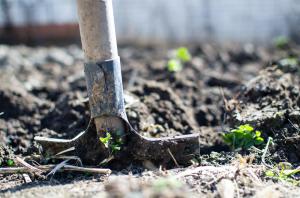 BRISBANE, QUEENSLAND, AUSTRALIA, March 7, 2022 /EINPresswire.com/ — As one of the most experienced providers of handyman services in the local region, Eddy Andrews has seen it all over the years. However, the experienced contractor had the find of a lifetime recently when he found a small amount of gold while undertaking some gardening work in one of his regular customers’ back gardens.

Having started his career in construction, Eddy Andrews then moved into various trades before launching his handyman services several years ago. This comprehensive experience has helped him to establish himself as one of the leading providers of indoor and outdoor handyman services across Brisbane.

Over this time, Eddy has worked with hundreds of commercial and residential clients, helping them to transform their properties and giving his clients the time to focus on what really matters. Renowned for completing the highest standards of work at the most affordable prices and in the fastest time, it is this gold standard of work that has seen him become one of the most sought-after names in the local area.

However, last week Eddy Andrews offered a different kind of gold service, when he uncovered a gold nugget while working in a customers backyard! Carrying out a general tidy up in the garden, Eddy was then tasked with planting some new plants in a flowerbed. As he was digging the hole to place the final flowers, his shovel struck something hard and shiny – and Eddy unearthed a small nugget of gold.

Worth several hundreds of dollars, the gold is estimated to be between 10 and 12 carats. Eddy will be splitting the profits of the sale equally with the homeowner, allowing them both to treat themselves after a difficult period for everyone.

Speaking after finding the gold, Eddy Andrews, added, “I was absolutely shocked when I found it. I had already planted several flowers and this was the last one of the day. As I dug my trowel into the ground, I felt it hit what I thought was a stone, so I decided to dig it out and move it away however it was only when I pulled it out from the ground that I realised it was shiny and then I think my heart skipped a beat!

I have been working as a handyman for several years and I’ve seen all sorts of things – but I never expected to be unearthing genuine gold right here in Brisbane!”

To find out more about Eddy Andrews, visit https://eddyandrews.net.


EIN Presswire’s priority is source transparency. We do not allow opaque clients, and our editors try to be careful about weeding out false and misleading content.
As a user, if you see something we have missed, please do bring it to our attention. Your help is welcome. EIN Presswire, Everyone’s Internet News Presswire™,
tries to define some of the boundaries that are reasonable in today’s world. Please see our
Editorial Guidelines
for more information.