Spring is here and gardeners everywhere are busy getting ready for the gardening season ahead.

I have always loved to grow food. There is something really special about deciding to make a salad for lunch and then immediately being able to pop outside and harvest a large luscious ripe tomato, or perhaps a handful of cherry tomatoes in various shades of red and yellow. Throw in some tender lettuce leaves plus a few slices of cucumber, then perhaps some herbs and a few blueberries as a garnish, and I am all set.

So, to accommodate my desires, I tend a petite “kitchen garden” right outside my back door, plus a good-sized vegetable garden up the hill which is filled with tomatoes, beans, potatoes, kale and much more.

Meanwhile, right in the middle of my flower garden, I have an assembly of high-bush blueberries with their own special history. Not only do they produce wonderful fruit but blueberry bushes are also great ornamental plants.

We have probably all heard about the importance of not growing the same crop in one place year after year, a practice which can lead to the depletion of specific nutrients as well as the build-up of crop specific pests.

And indeed crop rotation systems have been employed for thousands of years by farmers all across the globe. (Check out this interesting article wikipedia.org/wiki/Crop_rotation).

So I wanted an easy way to practice crop rotation in my personal veggie garden here in Goshen.

Our veggie garden lies just to the south of the old farm barn, in an open space where the Hayes family (who, for over 50 years, maintained an extensive dairy farm here) grew their potatoes.

And, for the last 20 years, I have used this sunny space to raise a mix of traditional vegetables, including tomatoes, beans, kale, squash, leeks and — of course — potatoes. 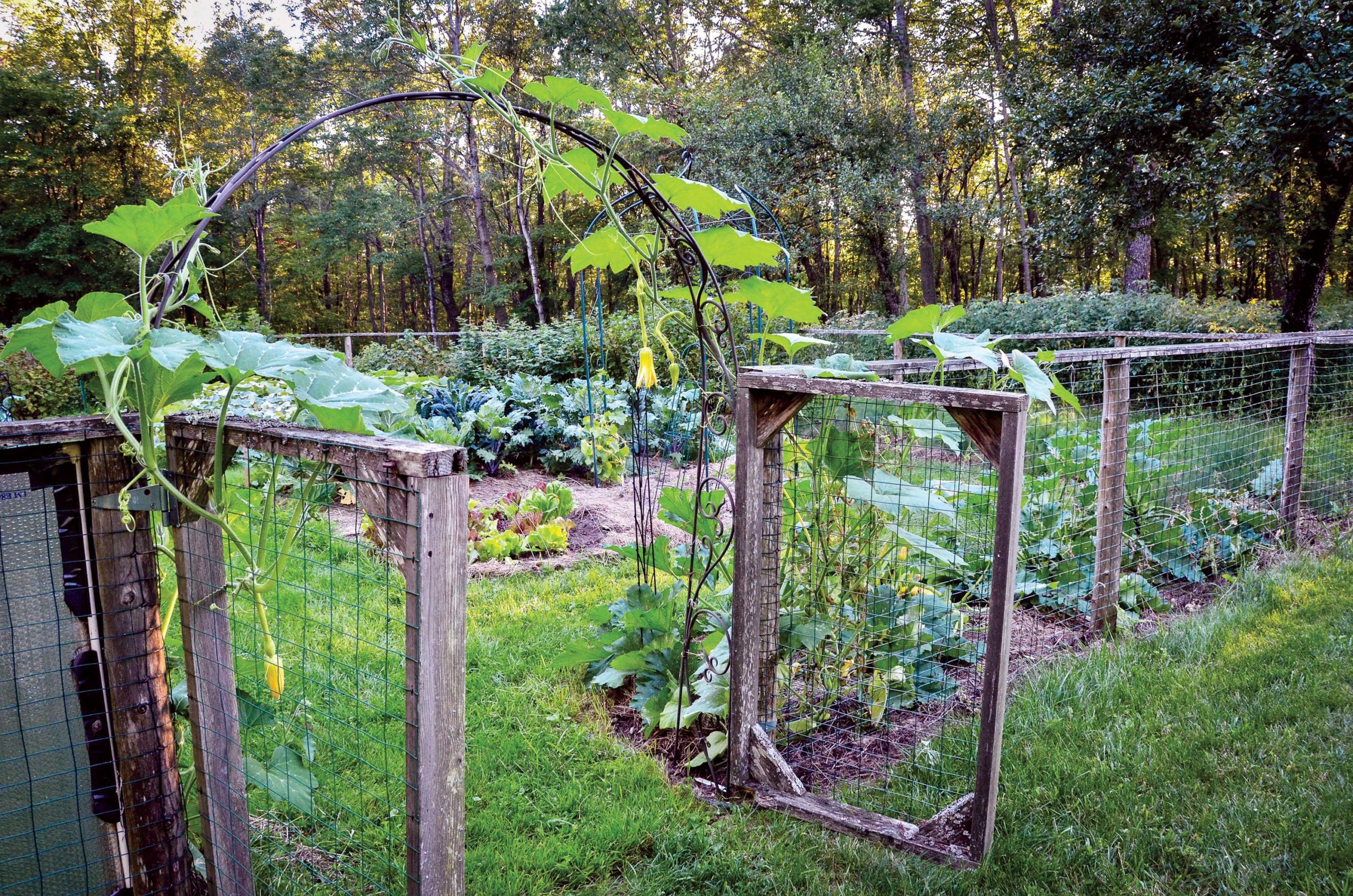 However, I decided against growing my own corn — I do not want to encourage visits for marauding raccoons. Instead I prefer to visit one of the many great organic farms around here that sell their own fresh corn throughout the summer.

At the outset I chose a four-square design, both to facilitate crop rotation and also because I liked the clean look it offered.

I started by enclosing the 40-foot square sunny space with a four-foot high fence, plus a gate at the northern end. I had heard that deer will avoid jumping into an enclosed space if they feel they will have trouble departing in a hurry. And, to date, this barrier has done an excellent job of deterring both deer as well as other creatures. Just once an enterprising woodchuck managed to dig his way in. But, after encountering our dog, he decided to quickly depart!

Next, I created a four-foot wide perimeter bed along the inside of the fence, and edged this with a grass path that is also four-feet wide. I use this perimeter bed to grow all my permanent vegetables and fruit bushes, including asparagus and rhubarb, several varieties of raspberries, plus black and red currents.

Two central grass paths (also four foot wide) run north-south and east-west. And, on either side of these paths, there are four 12-foot square beds where I grow all the typical annual crops including tomatoes, squash, potatoes and beans. The beds are edged with boards, 6-inches wide and 12-feet long, dug into the ground to create 4-inch high raised beds. This design allows me to step inside the beds to reach my plants, and also to add compost each fall.

To minimize weeding, every spring I mulch each square with a thick layer of hay spread over several layers of newspaper. Then, by using a slightly thicker application of newspaper and hay, I can create one or more central paths so that I can access the plants as needed. Also, to keep the outer lawn paths neat and tidy, I give them a weekly trim with my lightweight battery-powered mower.

I usually devote one of the additional squares to a mix of potatoes, leeks, kale and broccoli. And in the final square, I grow several different types of squash — typically six butternut squash planted in the centre (so that they have plenty of room to wander as the season progresses), plus zucchini and crookneck squash on each of the corners.

You can readily shrink this four-square concept if you do not want to devote this much space to vegetables. For instance you could reduce the central squares to either six-foot or even four-foot beds, and reduce the width of the lawn paths. You could also eliminate the perimeter bed with its permanent plantings.

In addition to my large four-square veggie garden up the hill, I also created a little kitchen garden just outside my back door where things are close at hand when I want to grab some herbs or salad makings.

Just like the old song — parsley, sage, rosemary and thyme — these four favorite herbs all feature in my kitchen garden. Creeping thyme covers the outer rocks and there is also a huge sage bush on one corner. These are both perennials here in Vermont, meaning they happily spend the winter over outdoors.

However, while rosemary enjoys the heat of summer, it cannot survive our cold winters. Thus I grow mine in a large pot that gets moved into the greenhouse for the winter.

And finally I would be lost without plenty of parsley. So each spring I make sure to buy a couple of six-packs of parsley at the local nursery which I then plant out in my garden.

There are also several lavender plants that flourish outdoors all year long, as well as a huge pot of Bay Laurel that too must be moved into the greenhouse for the winter — where it comes in very handy for flavoring soups.

However, despite all the space devoted to these herbs, I still have room for pretty flowers like nasturtiums and viola (both good for garnishing the salads), four cherry tomato plants, as well as several rows of lettuce, spinach and chard. I grow these from seed, first in cold frames, and then sown at fortnightly intervals from spring until early summer — plus a few more later to create a fall crop.

And finally the small side bed that runs along the edge of the house is home for some tarragon and lovage — both herbs that are useful in cooking.

And last — but by no means least — my collection of delectable edibles includes 20 high-bush blueberry bushes that flourish in one of my flowerbeds.

The soil up here in Goshen is quite acidic (with a pH of around 5.0) which is ideal for growing blueberries. If you live in areas of the Champlain Valley, where the soil tends to be closer to neutral, you might consider growing blueberries in raised beds and adding plenty of peat moss to help to acidify the soil.

Most of the bushes in my garden were actually growing in the meadow when we first moved to our Goshen house. Then, through a chance visit from a man who told us he had spent his teenage years here, we discovered that these original bushes had been planted by his parents when they all lived here — over 60 years ago now. 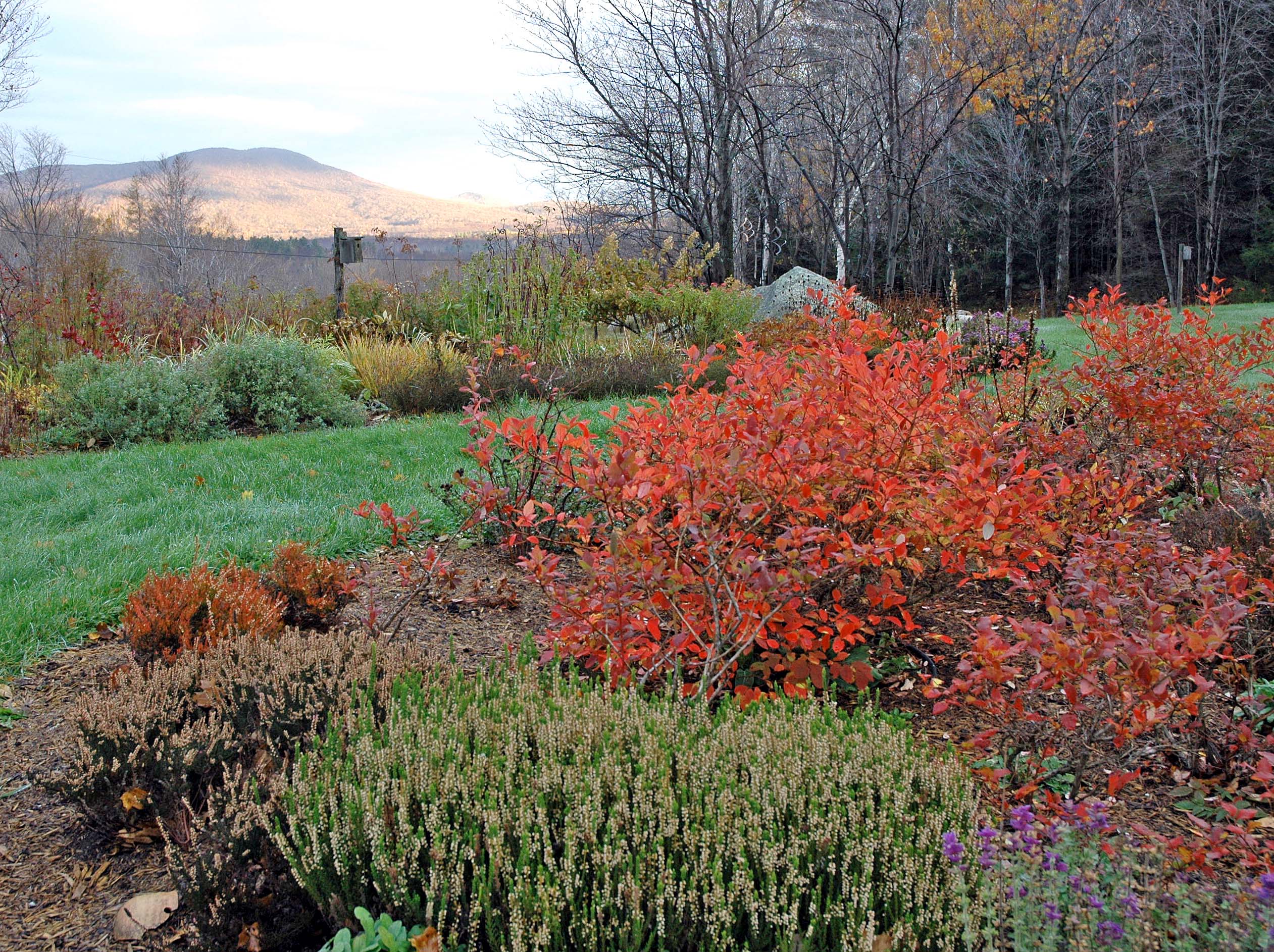 BLUEBERRY BUSHES PUT on their fall colors to rival those of the surrounding forest.
Photo by Dick Conrad

And to this day, those 12 bushes, together with eight more I added later, are still wonderfully productive. And in addition, each fall the bushes turn a beautiful red.

Last summer, in addition to the fresh blueberries we enjoyed for breakfast each day, I was able to freeze an additional 30 pounds of fruit, which even now are still providing us with healthy and delicious deserts.

Judith Irven and Dick Conrad live in Goshen where together they nurture a large garden.

Judith is a Vermont Certified Horticulturist and teaches Sustainable Home Landscaping for the Vermont Master Gardener program. You can subscribe to her blog about her Vermont gardening life at northcountryreflections.com.

Judith will be leading a “Design Your Own Garden” workshop at the Middlebury Studio School again this spring. The format is slightly different this year.  Each workshop will consist of two, four-hour sessions where participants get to develop a design for their own gardens. Workshops will be held on Tuesdays, April 19 and 26, and Saturdays, April 30 and May 7. More info and sign up at middleburystudioschool.org/adult-art-classes.

Dick is a landscape and garden photographer; you can see more of his photographs at northcountryimpressions.