With a little help from nature—and a whole lot of nurture—this once outdated en suite bathroom became a modern lakeside dream. But despite its newfound radiance, this space started as something old, awkward, and slightly dysfunctional. Its layout was narrow and fragmented and featured two separate vanities, one of which was located in the hallway near the bathroom. Other problems included a too-small shower, poor lighting, an antique bathtub (not in an on-trend way), and not-so-private toilet area.

When Interior Impressions was hired for the remodel, owner and principal designer Amy Leferink says she didn’t even know where to begin. “It didn’t have a functional layout at all,” she says. “It was just a tricky space to work with.” In fact, Leferink called the project one of the most challenging remodels she has ever worked on.

Going into the project, the homeowners had a few visions in mind: more vanity space, an open layout, a private toilet area, and more natural light. For Leferink and her team, this meant a full reconfiguration of the bathroom was necessary.

After a few rounds of floor plans and some backtracking due to plumbing challenges, Leferink says they finally landed on the perfect layout. To maximize the square footage, the designer decided to ditch the bathtub for a luxurious walk-in shower. She also incorporated a closet and toilet area in what was once the narrow entry hallway that led into the bathroom. 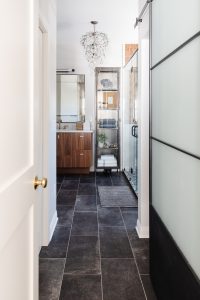 These spatial adjustments laid a necessary foundation for the remodel, but the various aesthetics and design elements chosen by Leferink and her team are what took this updated space to the next level.

Situated on Forest Lake with a gorgeous view of the water, Leferink wanted to make the home feel like an extension of the outdoors, working various nature-inspired elements into the bathroom. The team used muted earth tones and natural-looking materials to achieve an organic, yet modern look for the space. The eye-catching, custom-built vanities and their wooden cabinets are prime examples of how the team managed to bring the outside in. “We fell in love with this natural black walnut wood; it just has so much character,” Leferink says. “That was one of the jumping off points for the bathroom.”

She paired the rich, wooden cabinets with a Carrara marble countertop that beautifully suits the organic theme. These elements are set against a dark, limestone-like porcelain tile floor that’s illuminated by under-cabinet lighting.

The large walk-in shower serves as the bathroom’s main focal point, adding a certain elegance and “wow” factor to the space. Leferink says the homeowners’ decision to give up the bathtub wasn’t an easy one to make but ultimately allowed the bathroom to become something special. “This is not your typical bathroom,” Leferink says. “It feels very luxurious and high end, kind of like you went to a Four Seasons resort on an island.”

The new shower is enclosed by semi-frameless glass that runs the entire length of the wall, with a set of double doors for entry. Upon stepping into the shower, it’s obvious that neither the natural nor modern aesthetics were sidelined in this addition—in fact, the two styles coexist in brilliant harmony.

The shower walls are also covered in a light Carrara marble tile, enhanced with an architectural teak wood panel from the Tile Shop in Minneapolis. This functions not only as an accent wall, but also as an art piece that stands out in the room and draws in more natural elements. A few existing windows fill the shower with natural light and cast a soft, welcoming glow upon the rest of the bathroom. 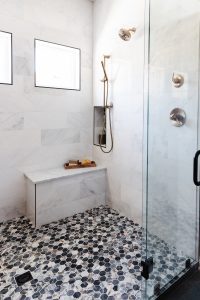 A vibrant hexagon tile pattern covers the shower floor, featuring black marble and caramel tones that contrast lighter elements. “I wanted to pull some of the darker color onto the floor to ground the space and give it a little more modern feel, a little bit more of an edge,” Leferink says.

Despite many challenges, Leferink and her team were able to completely transform this previously clunky, antiquated bathroom into a polished, nature-inspired space that has since become the homeowners’ favorite part of their house. “It just kept evolving,” Leferink says. “The ideas got bigger and better, and it morphed into this amazing room that we never imagined it was going to be.”

How much does it cost to add a bathroom? |